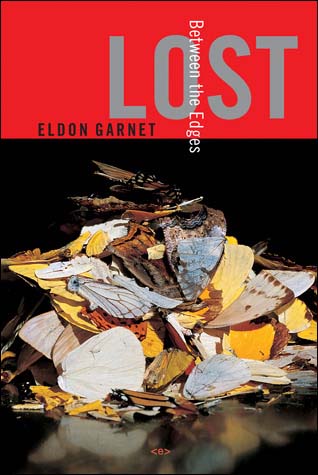 “I understand that you regard the film Schindler’s List as a total lie, as Zionist propaganda.” Zundel clears his throat, preparing the posture of his body to pontificate, to deliver a speech he has obviously memorized for use at a hate rally: “Spielberg’s movie is a perfect example of Hollywood hate propaganda . . . .”—from Lost Between the EdgesIn Eldon Garnet’s Lost Between the Edges, a feverish intellectual, frustrated by the failures of government, acts alone to eliminate an infamous Holocaust denier. The protagonist, a renegade academic and punk intellectual known only as X, puts his radical ideas into action by firebombing the headquarters of Ernst Zundel, publisher of Did Six Million Really Die?With its incisive critique and its use of real documentation, Lost Between the Edges blurs the boundaries between fact and fiction. Garnet, like W. G. Sebald before him, uses factual documentation of dubious authenticity to construct his narrative. But as the novel progresses, its story becomes so powerful that we find its truth lies not in its factual trappings but in the emotional and intellectual reality of its expression. Garnet reveals the illusory nature of facts, showing not only how they dazzle but also how they destroy.Lost Between the Edges captures the energy and verve of youth in revolt, fired by rage and ideas. Garnet’s book will be hailed as a new classic of symbolic warfare waged in the street and the mind.

“Eldon Garnet’s Lost Between the Edges is a novel surprising not just for the prose but also for the passion … Garnet uses imaginary and real characters, such as Zundel, and creates a realistic, sometimes frightening, sometimes pathetic, image of him. The conversations with white supremacists and ARA members are so accurate that they may have been dictated … This book is important not just for its style and intelligence but because these pernicious forces at the edge of civilization still remain.” Ryan Oakley Sunday Book Review”

“Expectedly, this documentary support, in the end, supports nothingand this ambiguity, or frustration, is Garnet’s ideal…. This realization, that Garnet’s fictional Zundel is the real and truly repulsive Zundel (and might X, who destroys Zundel’s headquarters, actually be a version of the young Garnet, the incendiary author himself?), is stirring, and establishes the author of Lost Between the Edges as a master commentator on the contemporary religion of relativism … Garnet’s fictionalized “evidence” of Zundel’s hatred exploits the exploiters, and does so with unforgiving intelligence.” Joshua Cohen The Jewish News”

“There is something a bit Kafkaesque about Lost … both Joseph K. and X are anonymous allegorical characters, who represent ideas rather than people.” Ibi Kaslik The Globe and Mail”

“I didn’t expect this book to take me where it did, and when I came back to my everyday world it didn’t feel the same any more. Eldon Garnet employs a deadpan narrative that heightens one’s awareness of the possibility for evil on your own street. It’s a terrific book.” Douglas Coupland”
—